This season, say tradespeople, things are even worse. According to the local hotel association, occupancy on the island is running at only 40-50 per cent 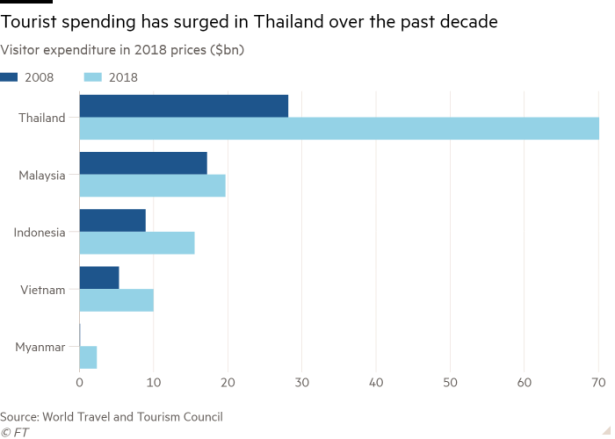 Phuket’s old town, with its open-air noodle shops and brightly painted Sino-Portuguese shop fronts, is a favourite social media and selfie backdrop for tourists from China. The island, which has a year-round population of 500,000, typically attracts about 7m foreign visitors a year, of whom 2m are Chinese — Thailand’s biggest source of tourists. Chinese tourists can normally even be relied on to come to Phuket in the May to October rainy season when Europeans mostly stay away. But this month Thalang Road, in the heart of the old town, has been largely deserted. Chinese groups cancelled trips to Phuket en masse last year after a boat carrying tourists from the mainland capsized in July, killing 47 people.. Relatives of the passengers on a boat that capsized off Phuket await updates on the accident in which 47 people died. Chinese groups cancelled holidays after the disaster Chutimon Konglao, a minivan driver, says this is the worst season she has seen in more than a decade of driving tourists around the island. “After the boat accident, we could really see an impact, but this year is worse,” she says. “Nobody wants to spend money, and nobody knows what will happen.” From Phuket’s old town to Chiang Mai’s temples and Bangkok’s backpacker hostels, visitor numbers are falling, and Thailand’s cornerstone tourist industry is heading into a slump. For decades, Thailand has been a model of how to turn tourism into a national “brand” and a powerful motor of economic growth. With a product that mixes beaches, hedonistic nightlife, food, discount shopping and an air of spirituality, it has managed to attract both backpackers and luxury tourists from western countries in search of winter sun. In the past few years, it has also drawn in a record number of Chinese tourists who were — until recently — 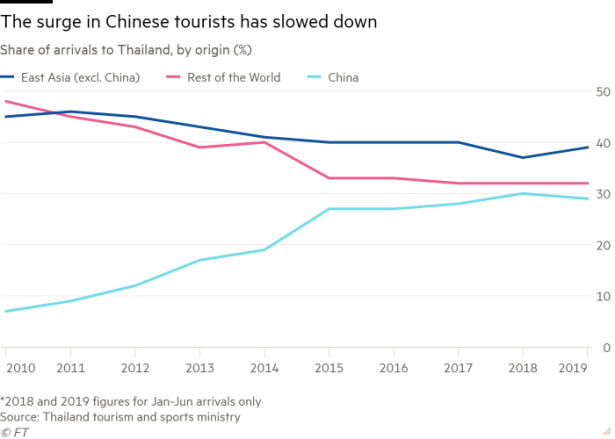 seen as a source of limitless growth. However, Thai tourism is now struggling and faces three challenges. First, the slowing economy in China has meant fewer visitors, compounding the decline in arrivals seen after the Phuket boat accident. Second, Thai hoteliers and tour operators have been whiplashed by the move towards more independent travel empowered by the surge in digital travel agencies and companies such as Airbnb. Third, the Thai baht has risen sharply against the dollar this year, eroding the kingdom’s fabled selling point as a value-for-money destination. “They may feel like the cost is too high compared to Vietnam or Cambodia,” says Ben-ya Hararak, a Phuket travel agency owner, when asked why people were staying away from the island. Critics say Thai policymakers and businesspeople, who have applied their minds skilfully to digital transformation of industries such as retail and manufacturing, appear to be stuck in a numbers game of shooting for visitor records at all costs without devoting enough attention to the infrastructure, skills or services needed to support tourism. “Thailand has not thought enough about the ecosystem of a more mature tourist industry,” says Pavida Pananond, associate professor at Thammasat Business School in Bangkok. “I think we need to balance between the need for headcount and the quality of tourist sites.” G1589_19X Thailand map 2 Tourism is both Thailand’s biggest export and its best-known product: the kingdom’s calling card, and a deep well of goodwill for this country of 69m. The sector generates about 10 per cent of gross domestic product in south-east Asia’s second-largest economy, and more than a fifth of GDP if supply chain jobs are included too, according to the World Travel and Tourism Council. As the country set new foreign visitor records in recent years, tourism became a perpetual golden goose on which economic planners could rely. The more than $100bn a year that tourism generates directly and indirectly is the single biggest contributor to the kingdom’s reliably healthy current account surplus — the main indicator causing foreign investors to park money in Thai baht securities as a “safe haven” asset, pushing up the currency. But analysts are beginning to notch down their forecasts for the industry, at least for the near to medium term. “Going forward, we expect to see flat tourism growth, significantly slowing goods export growth, and a shrinking trade balance due to global trade tensions,” said Kiatipong Ariyapruchya, senior country economist with the World Bank in Thailand. “We are therefore projecting a smaller current account surplus.” Chinese tourists in Chiang Mai. Fewer are now holidaying in Thailand as a result of China’s slowing economy The slowdown is beginning to hit related sectors. Thai Airways International, the flag carrier, recently reported that losses doubled in the second quarter, blaming slowing visitor numbers and intense competition. Senior executives have taken salary cuts to weather what chief executive Sumeth Damrongchaitham calls “this time of crisis”. Budget carriers Nok Air and Thai AirAsia reported second-quarter losses too. Prayuth Chan-ocha’s government this week put tourism at the centre of a $10bn stimulus plan, extending free visas on arrival for another six months for several countries and offering domestic tourists cash bonuses and rebates. (The cabinet balked, however, at a proposal to allow Chinese and Indian citizens to travel visa-free, citing security concerns.) The slowdown in tourism comes amid a broader reckoning. GDP growth of just 2.3 per cent in the second quarter lagged behind most of its neighbours. The industries on which Thailand built its wealth in the 1980s and 1990s, including low-cost manufacturing and carmaking, are transforming and the kingdom needs work to catch up. Some economists say Thailand risks falling into a “middle-income trap”— no longer poor but lacking the tools and momentum to become rich when digital, IT and other skills are in demand. Nearby Vietnam is the region’s rising economic star. Its tourist numbers are growing in the double digits, drawing the kind of younger visitors who first came to Thailand two or three decades ago. “Thailand is at risk of losing share in the low-budget holiday sector as the tourism markets develop in neighbouring Vietnam and Cambodia,” Fitch Solutions said in a recent analysis.

Other places lower price and Nice Woman as well