Kalasin is a town in north-east Thailand, the capital of Kalasin Province. As of 2006, it has a population of 37,653. It covers the whole tambon Kalasin of the Mueang Kalasin district, an area of 16.96 km². Kalasin lies 521 km north-east of Bangkok

Fa Daet Song Yang is an old ruin that’s supposed to date back to the 13th century. Not much is left, except a few chedi scattered around a large open area with a bit of shade (so it can be very hot in the afternoon). The biggest chedi is called Phra That Yakhu, supposedly to contain the remains of a senior monk.

The Black Statue Of Wat Klang      A temple with a huge compound. It has a highly revered Buddha image called Ong Dam (‘dam’ means black in Thai), a small bronze Buddha image that is…. you guessed it!…. black in color. This image is kept inside a glass-walled room in a prayer hall at the back of the temple ground.

Quite a few things to see and do so a good place to visit. 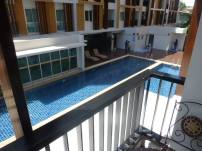